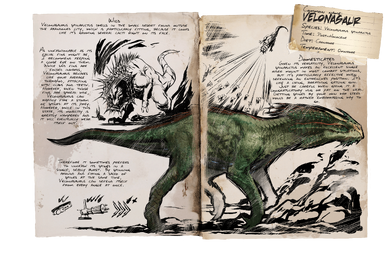 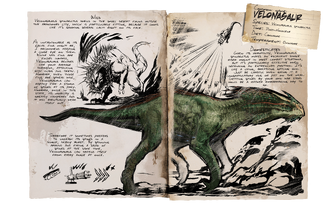 Dossier
These values may differ with what you see in-game or written elsewhere. But that is what the dossier says.
Groups
Dinosaurs, Fantasy Creatures
Species
Velonasaurus spinavultus
Time
Post-Holocene
Diet
Carnivore
Temperament
Omnivore
Release Versions 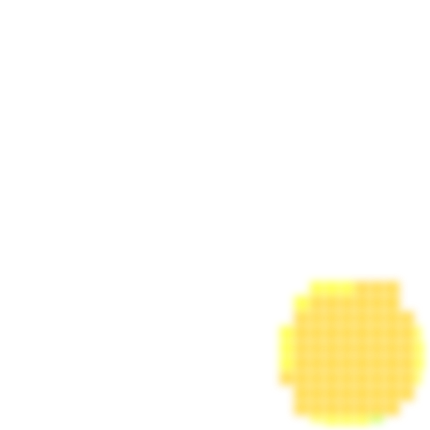 The Velonasaur is one of the Creatures in ARK: Survival Evolved's Extinction expansion.

The Velonasaur will wander around the desert dome attacking any herbivores in sight. At mid range it will fold out its frills and shoot spines for an impressive DPS.

A medium sized, bipedal carnivorous theropod that has a similar shape to a Raptor or Dilophosaur. The Velonasaur can be identified by its large cacti-like frills or fins that surround its head, similar frill-like growths on the sides of its body and tail, osteoderms scattered across it's back and limbs, long forearms, and it's quilled tail. The quilled areas are also covered in wrinkly dark skin with glowing blue spots. They most often appear in warm colors: such as red, orange, yellow, brown, black and grey; however they are sometimes seen in blues, greens, and turquoise.

This section displays the Velonasaur's natural colors and regions. For demonstration, the regions below are colored red over an albino Velonasaur. The colored squares shown underneath each region's description are the colors that the Velonasaur will randomly spawn with to provide an overall range of its natural color scheme. Hover your cursor over a color to display its name and ID.

This section describes how to fight against the Velonasaur.

The Velonasaur is a strong well rounded creature. If a player is a good distance away, it will shoot quills at the player. If in close range, the Velonasaur will do a swipe attack, dealing moderate damage. Sometimes it will swing its body around and throw quills similar to a

Use rocks, trees, and buildings nearby to duck behind if the Velonasaur starts firing quills.It should be noted that if you are too far away from the Velonosaur, it cannot fire quills at you. Try to fight these dinosaurs with other survivors so if you are targeted, your tribe member can cover you. A

Riot Shield can absorb a barrage if needed. If cover isn't an option, get up very close to them and kite them but don't leave close range; they will only fire their quills when a certain range threshold is reached. Another strategy is to find an low cliff or mountain next to the Velonasaur. Then you want to aggro it, if you are the right angle the Velonasaur will shoot at the cliff; due to their code forcing them to shoot at your mid torso, you will be able to shoot the Velonasaur without it hitting you. Once it starts running simply follow it and keep tranqing it until it’s knocked out.

Longneck Rifle or a

Crossbow is suggested to take one of these down. Decent

Flak Armor or higher is almost a necessity to take a higher level down. If you feel confident, you can go in with an apprentice+

Sword and metal or riot shield.

The Velonasaur can be a menace if one is unwary of their behavior. Staying at range will allow them to fire a constant barrage at you, shredding basic flak armor in only a couple of seconds and bringing a swift death. They also have a close-range AoE attack that can cause serious damage but this seems to be rarely used or used just once or twice during an encounter.

The Velonasaur is not incredibly fast, so you should be able to outrun them on most tamed dinosaurs. This also means you can quickly rush them while riding an equally tough or tougher creature like a

Carnotaurus and they will have no time to react with their ranged attacks. They also have low torpor so you can knock them out or get them to flee quickly. The Velonasaur typically travels alone or with a mate, so you usually won't have to worry about packs.

The Velonasaur tames through the knockout method. It has an attack where it shoots quills rapidly at a target. These can greatly damage both the player and the player's armor. Once you have a way to defend yourself against the quills, taming is easy. The Velonasaur has generally low torpor, and will tame fairly quickly.

It is best to use two or more survivors and have someone hold a shield out to grab aggro of the Dino. Have each survivor place a wooden or stone wall/windowed wall on opposite sides of the Velonasaur. Then, have one survivor bola the creature then duck behind the wall. The Velonasaur will target that survivor. The other survivor(s) will then have a clear shot either through the window of the wall or the side. If the Velonasaur targets you, duck behind the wall for cover.

If another survivor is not available, a really simple method of taming the Velonasaur is to tank it with another dino. A Carno leveled in some health or using a quality saddle can be used to confront the Velonasaur before it can react. Typically it will just try to swipe at the dino at this point. Dismount with your mount on passive, stand back some, and fire away with your tranquilizing weapon of choice. Once they reach the torpor limit to run, they are easy to keep up with and then down.

Another tactic, if a health-boosting dino is not present, and there are no structures nearby, is to utilize the natural surroundings. Velonasaur quills cannot reach past objects, and so it will not hit survivors hiding behind it.

Easier than all of the above strategies is to simply run up to one in even primitive flak and to stay within melee distance while knocking it out. Its melee damage is comparable to a small flock of dodos, and taking into consideration how low its torpor limit is, one can easily knock out even a max level Velonasaur with no problems. The only downside to this strategy is that you have to find one that isn't near any other potential threats which could tamper with the knockout process, especially other Velonasaurs that cannot be rendered harmless by running into their melee distance.

If none of those suit your fancy, build one wood foundation three wood walls a wooden doorway, and a wood ramp. Place the wooden foundation down, place the wooden walls in a U then the door in the last spot and place the ramp going up away from the door. this will take advantage of the coding of it shooting at your torso allowing you to solo tranq it with taking little to no damage.

Disclaimer: It should be noted that these ideal power/counter situations do not occur in official PvP past a particular plateau of development; and that most tames with a good tribe are kept in Cryogenic Stasis behind Vault walls, Heavy Turrets, chutzpah, and man-hours.