Currently, there are 7 official ARKs, 3 of which are canon and 4 of which are non-canon, as well as 3 additional maps: 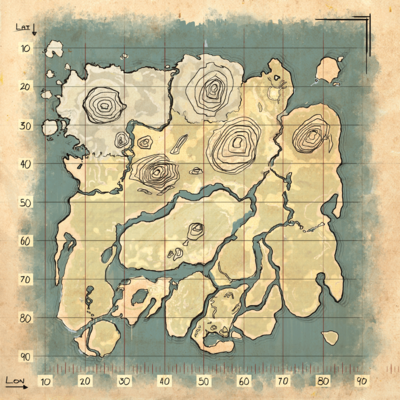 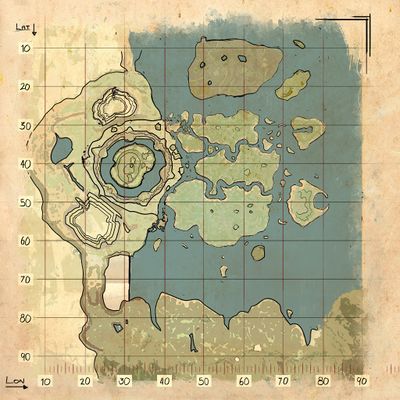 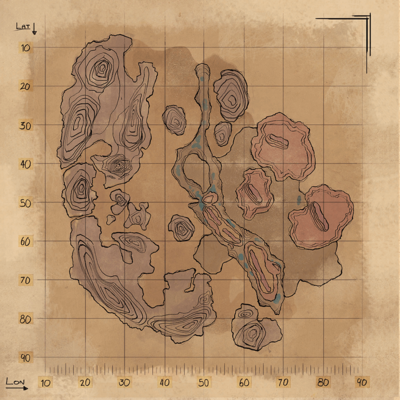 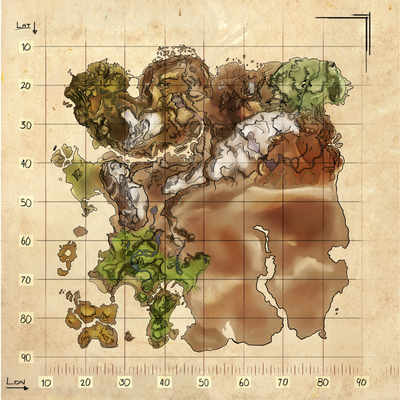 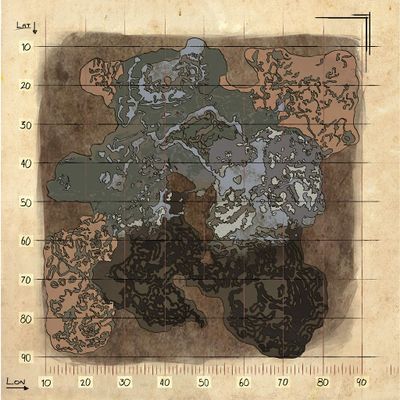 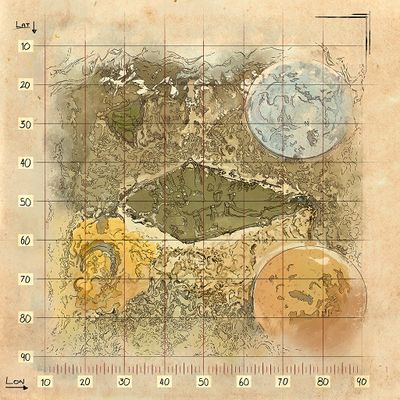 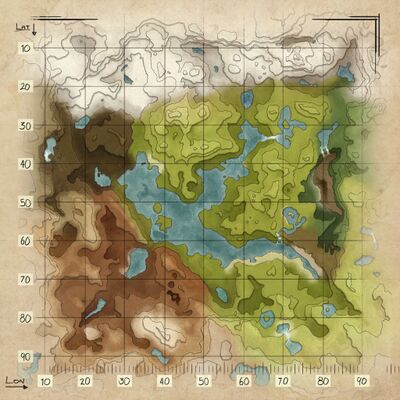 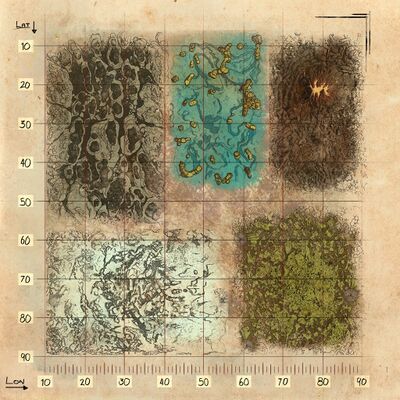 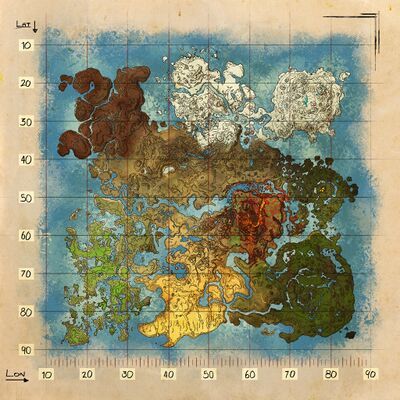 In the 22nd century, two superpowers had mastered Element-based technology (referred to as Tek) - the United Republic of Earth (URE) and the Terran Federation (Feds). For reasons that are still unclear, the two factions were drawn into a war that ultimately consumed them both. HLN-A described their conflict as two dogs fighting over the last scrap of meat on a carcass. Over the course of the conflict, element grew to critical masses at alarming rates. As a result, Element spread across the planet, and natural disasters ravaged the environment and killed its inhabitants. In the aftermath, very few landmarks and monuments remained intact, with most traces of the old world consumed by rapidly-growing veins of Element. One notable surviving landmark is the city of Sanctuary, featured in Extinction. This is summarized in Helena's abstract dream in her Extinction explorer note #25 about a purple figure ripping a red molten heart from another stone figure. When the heart stopped beating, shadows rose from the purple figure and began to destroy everything.

Human, Creatures, and Plants. These ARKs were launched prior to a global-level extinction event in which Element wiped out Earth's Human population. They are incredible feats of human engineering, kilometres-wide mobile space stations housing vast vaults of genetic information, cloning devices, and terraforming technology. In their dormant state, they wait in Earth orbit, simulating a diverse ecosystem by controlling onboard climate and animal populations. The dome that protects this false ecosystem from the void of space also doubles as an artificial horizon, masking the station's true nature with a blue sky and an artificial day/night cycle. Humans are deterred from reaching the edge of this artificial horizon by methods that look like natural boundaries. On The Island, inhabitants are contained by an encircling sea of dangerous predators. On Scorched Earth, this is accomplished by cultivating Deathworms.[1]

For an unknown period of time, the ARKs awaited an activation signal from Earth. The stations are programmed to perform a controlled descent in response to this signal, touching down on the planet's surface. On landing, containment forcefields and artificial horizons deactivate, unleashing the ARK's inhabitants. Each station is a giant seed built to bloom over the Earth's wasteland, its terraforming systems sweeping away the Element infestation.[2]

Curiously, although designed to repopulate the planet, modern Earth species are almost entirely absent from every known ARK. Their creators used each model as a whimsical genetic playground, featuring new species that are either heavily modified or completely fabricated. Scorched Earth, a desert ARK, is a breeding ground for wyverns and other fantastical monsters. The Island, the closest known ARK to a 'pure' Earth ecosystem, features modified versions of animals from across prehistory unnaturally mixed together.

The ARKs' strange quirks do not stop at their animal populations. Their builders discovered a hidden part of the brain called an 'engrammic matrix', which stored information in some human bodies even after years of decay. Personalities and memories were recreated for people who had been dead for centuries or even millennia.[3] These people were set loose in the ARKs with no idea of where they were, or how much time had passed.

Every human that is on the ARK have a strange implant in their left wrist in the shape of a prism. This implant somehow acts as a medium between two languages by translating the speaker's language to the listener's language so the listener completely understands what the speaker is actually saying.

With the defeat of the King Titan and the activation of the signal, every single ARK descended to Earth, including the Aberrant ARK with Rockwell and a station full of corrupt Element.

Homo Deus, meaning "same god" or more literally "god-man" from the Latin and Greek roots, are conscious entities that watch over the ARKs. According to HLN-A, they are energy-based beings who live in a tangential reality and were an option of escape for humanity. The technology of Element, the Genesis Simulation, and the ARKs were likely developed from the same principals; and thus the Homo Deus were capable of integrating with the ARKs. These beings can rarely resurrect

Human. A notable one, The One Who Waits/Helena, guides the survivor through The Island, Scorched Earth, and Aberration to Extinction. With Element prolonging the ARK's time in orbit, this caused the Homo Deus to lose themselves. Helena is the last Homo Deus whose mind hasn't crumbled yet. While being all powerful and all-knowing, Homo Deus have other abilities:

In Genesis, HLN-A notices that the Homo Deus technically don't exist in the physical world anymore and have their own plane of reality, a reality Helena describes that few can ever reach. Even Helena suddenly disappeared for an unknown reason.

It is worth noting that every human using the Genesis technology did not become Homo Deus. Some prerequisite seems to exist, but it is tastefully undisclosed. The only clue on who becomes a Homo Deus is from Santiago's Mek Pilot Evaluation on Helena Walker, the only mek pilot in-lore that has maxed out every synchronization gauge. The reason she became a mek pilot was her highly advanced nervous system where it can process information at a much higher rate.

While the ARKs simulated environments in analog, the Genesis Simulation was entirely virtual. Housed aboard a colony ship[4] it was built to train passengers in preparation for arrival, without waking them from hibernation. Genesis was designed by the same group that built the ARKs. Both projects seem to have developed concurrently, with lessons learned from one feeding into the other. For example, the Magmasaur was originally tested on Scorched Earth's ARK before being restricted to the Genesis Simulation[5], but it was a Genesis Simulation experiment that ironed out the behaviors of dinosaurs for The Island.[6]

The first simulation prototypes were obviously artificial collections of geometric shapes.[7] From humble beginnings, Genesis was built into a technological marvel rivaling even the great ARKs, in a more compact package. Its design focus changed several times over development. Remnants of code from older versions still linger, causing glitches.[8]

Brain-machine interfacing and virtual reality technology became advanced enough to create an environment almost indistinguishable from the real world. Building on the ARKs' technology for manipulating the Engrammic Matrix, Survivors could even edit their own minds, though this functionality was left out of the final version after it proved addictive and destructive.[9]

There are five environments simulated: Bog, Moon, Ocean, Snow, and Volcanic. Anti-contamination codes work to keep elements of one ecosystem from crossing over into another. They simulate extremes biomes that can greatly impact Earth as a whole. However, these extremes are not found on Earth in its current hazardous state.

With the Genesis Simulation technology near perfection, the creators of the ARK move to phase 2: creating prototypes. Proto-ARKs can be found on Extinction. Unlike the environments that were sent up into space,

Arat Prime is a mysterious location on the far side of Earth from Sanctuary City, somehow related to both the ARKs and the Genesis Simulation. In modern times, Turkey's Mount Ararat is associated with the story of Noah's Ark in the book of Genesis. In Christian tradition, the mountain is considered the final resting place for the Ark.[10] The conspicuously similar name of Arat Prime may be a hint as to the facility's purpose. Messages scattered across the games imply that Arat Prime may be the mountain's inverse - a launching platform, not a landing site. To date, most information concerning Arat Prime comes from encrypted messages scattered across Sanctuary, readable by those wearing a Tek Helmet.

Exactly what might have been launched from Arat Prime is still speculation. Notably, the final cutscene of Genesis: Part 1 reveals that the Genesis Simulation is located on a colony ship traveling through space.[4]

With Earth currently not rotating, the area around Sanctuary had constant exposure to the sun, giving an impression of constant day. Since the location of Arat prime is on the far side of Earth, it would experience the opposite: constant night.

According to HLN-A, Diana and Mei Yin made it to Arat Prime, where they sent Helena inside the Genesis simulation. [11]

An unknown event that will soon come to Earth in the ARK universe, Helena mentions that it will soon arrive before disappearing and according to HLN-A, the Genesis Simulation keeps participants under constant pressure to prepare them with survival skills in anticipation for the upcoming event.

In Diana's Explorer notes, she mentions the amount of days she met Helena and Mei Yin since she arrived on Aberration. She refers to her arrival on Aberration as "The Arrival". "The Arrival" has something to do with more humans suddenly waking up on the ARKs after their supposed deaths, just like how the player wakes up on the ARKs when starting the game.