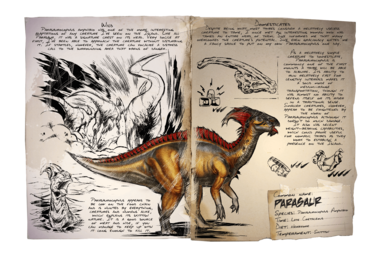 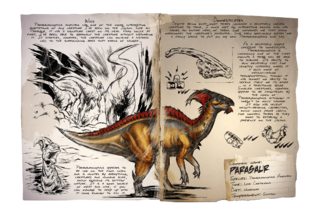 Dossier
These values may differ with what you see in-game or written elsewhere. But that is what the dossier says.
Group
Dinosaurs
Species
Parasaurolophus amphibio
Time Period
Late Cretaceous
Diet
Herbivore
Temperament
Skittish
Release Versions

This article is about Parasaur, not to be confused with

The Parasaurolophus (par-ah-SAWR-OL-uh-fus) or Parasaur is one of the Dinosaurs in ARK: Survival Evolved. It is also referred to as "The poor man's Iguanodon" for the fact that it serves the same purpose as an Iguanodon, but can be tamed much earlier in the game.

Parasaurs are one of the passive dinosaurs, and will not fight back even when attacked and when you take one of their eggs. However, the Parasaur is one of the fastest sprinting dinosaurs in the ARK, and can be quite tricky to catch.

A large, bipedal dinosaur of the hadrosaurid/duck-billed variety, the Parasaur is well known for its long, arching head crest and duck bill. They most often appear as variations of red and green, oftentimes with vibrant, red, white, or yellow spines. You can also find them in black but it is very rare.

This section displays the Parasaur's natural colors and regions. For demonstration, the regions below are colored red over an albino Parasaur. The colored squares shown underneath each region's description are the colors that the Parasaur will randomly spawn with to provide an overall range of its natural color scheme. Hover your cursor over a color to display its name and ID.

This section displays the Tek Parasaur's natural colors and regions. For demonstration, the regions below are colored red over an albino Tek Parasaur. The colored squares shown underneath each region's description are the colors that the Tek Parasaur will randomly spawn with to provide an overall range of its natural color scheme. Hover your cursor over a color to display its name and ID. 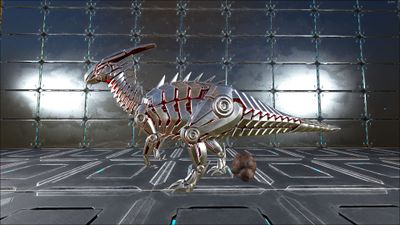 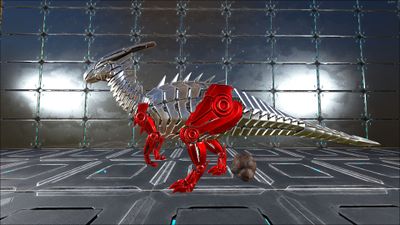 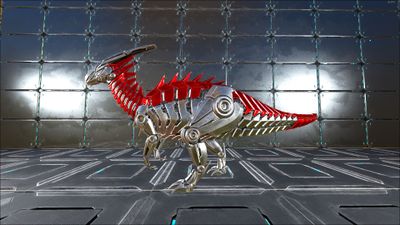 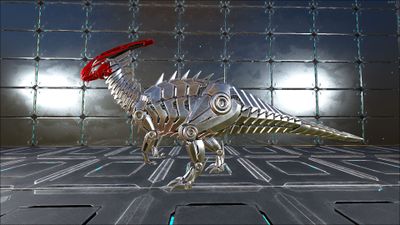 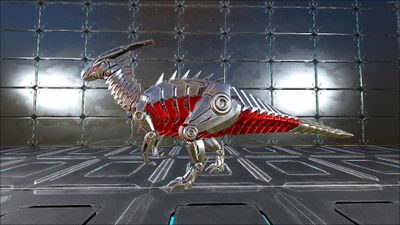 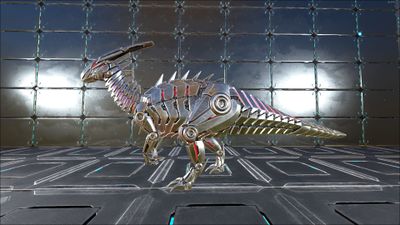 The Tek Parasaur is a creature that was permanently added to the game in the Extinction Chronicles IV event. It is a unique alternate of the original Parasaur, and is purely made of Tek. Unlike the original, they spawn at a 5% rate, with a 20% higher level than usual.

Knocking a Parasaur out is a tough thing to do, as they will run much quicker than humans can, once they are attacked. One of the best strategies is to get the Parasaur stuck between some rocks or trees and merely punch it. Be careful not to damage it once it is knocked out as that affects the taming effectiveness.

There is also another method of knocking out a Parasaur, this method consists of using the bolas on its legs which immobilizes the creature. This leads to the creature being open to punches/slingshots which will eventually knock it out.

Another method is to use multiple players to "pen" the Parasaur into a location it can't escape, leading it towards rocks or structures.

This section describes how to fight against the Parasaur.

Fighting a Parasaur holds no inherent danger, as they will flee upon initiating. The main risk from attempting to kill / KO a Parasaur is that while giving chase, the Parasaur leads the player into hostile territory. Parasaurs will not react if you steal their eggs.

The most efficient method is to initiate with a

Bola strike to the legs, immobilizing the Parasaur more than long enough to knock it down with a

Wooden Club or spear it to death. Without a

Bola, the Parasaur will run away when threatened, often getting itself stuck on rocks or trees, again leaving it vulnerable. A good idea for players without the bola engram is to position yourself away from where you wish to scare the Parasaur into such as a dead end or trees, this can turn a potentially lengthy chase into a quick kill. Quickly volley arrows into it or spears so it cannot get a chance to run in the first place.

Dilo are good when trying to kill this dino at very little cost. A small pack of three or four will slow the parasaur to a speed the player can get some hits with a spear and kill it before it recovers.

Any weaponry will suffice in taking down a Parasaur, as long as it is used to its highest efficiency. Melee weapons should be used by launching an impromptu attack on the head for greater damage. Ranged weapons can take one down during a chase.

The Parasaur may run into more hostile areas when being chased, increasing the risk of aggravating more dangerous dinosaurs. A casual hunting party can be devastated by the appearance of a

Because Parasaurs are able to clip into other dinosaurs, you may find running into them while hunting with a mount causes the Parasaur to lock into place. Otherwise, their relatively low health, fleeing nature and large size make them easy prey for a player of any level.

Parasaur can honk to scare small wild/enemy creatures away when they are near them.

The following small dinosaur will flee if within its horn range:

For information pertaining specifically to the real-world Parasaur, see the relevant Wikipedia article.