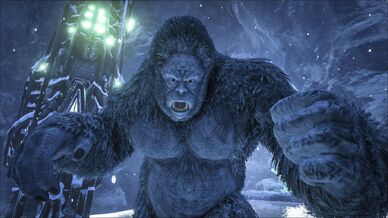 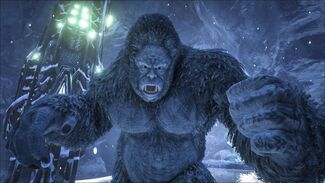 Small
Drag Weight
150
Carryable By
Immobilized By
Can Damage 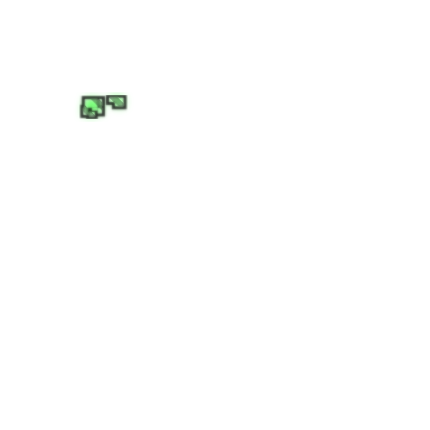 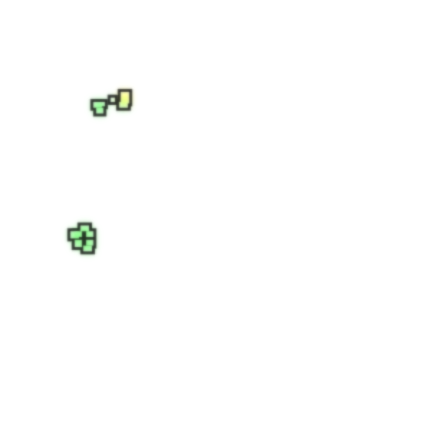 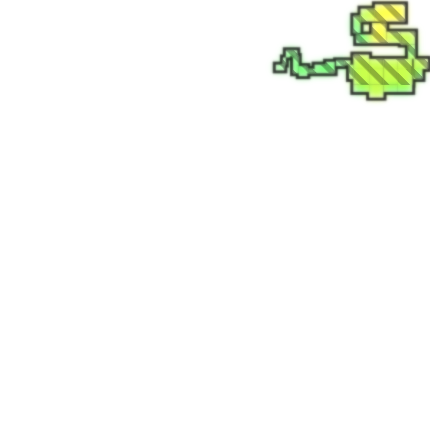 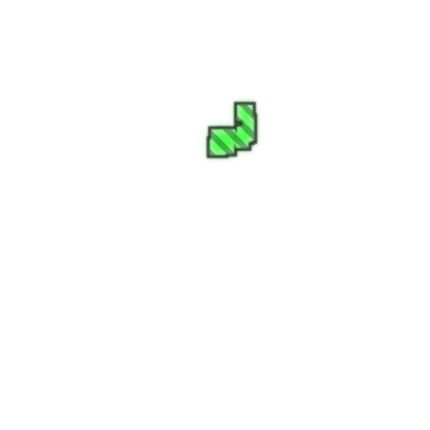 The Yeti is an Alpha-tier creature in ARK: Survival Evolved, and one of three Alpha Herbivores, the other being the

With the introduction of the Snow Cave, an Alpha variant of Gigantopithecus was added. These Yetis have significantly higher base stats and are untameable. Due to spawning within a Hard Difficulty cave, they are also guaranteed to spawn at exceptionally high levels - anywhere up to 350!

These apes are vicious, terrifying creatures that will decimate any adventurers hoping to step foot inside the cave. Stay clear from them, or use extremely powerful guns and weaponry to slaughter them before they get their powerful hands on you! They are very dangerous!

The Yeti always spawns with all its color regions white.

The Yeti always spawns with the same color scheme and has no color regions.

This means it is currently impossible to make alterations to the Yeti's colors.

This section describes how to fight against the Yeti.

Yetis are heavy hitters with a large pool of health. You have to be a glass cannon or a harasser to take them down. Hitting hard with shotguns or Rocket Launchers is highly advised. Mowing down the Yeti is also a great idea ( for larger tribes ). C4, even though its expensive, can take down even a high level Yeti. Of course, you can always use Grappling hooks to stay above it and slowly kill him by shooting Arrows from a Bow, a Crossbow or a Compound Bow.

Using guns is highly advised. Melee is a bad idea, but a tribemate with a shield can be invaluable as a decoy while the rest of the tribe shoots the Yeti. A large tribe can use multiple Fabricated Pistols to mow down a Yeti, multiple Yetis are invulnerable to this strategy. Hanging above him with a grappling hook and shooting him down with arrows is a "cheap" alternative.

It is highly advised to bring big mounts such as Rex, Spino or Therizinosaur to defeat them on The Center. The caves containing Yetis on The Center have very big entrances to allow them to enter.

Firearms ( Fabricated or not ) will do the trick, as long as they are Apprentice level, or higher. Melee will get you killed in a matter of seconds. Compound Bows do damage to him, but the ammo is a bit expensive.

It only spawns at freezing places, making Fur Armor a necessity to survive, but does not absorb much damage. The limited means of defence that players can utilize, plus its devastating melee damage and incredibly high Health, it is therefore a formidable opponent, making player an easy, sometimes one-hit, kill.

It's surrounding, usually filled with other snow biome predators such as Dire Wolves, Purlovias and Polar Bears, also pose major threats to survivors.

Headshots will be most effective.

As herbivores, they have shorter aggro range than other creatures you may engage in Snow Cave.