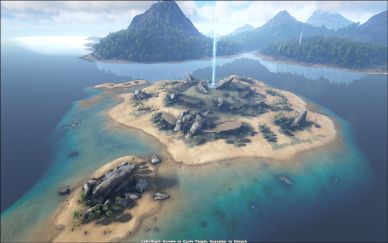 The Dead Island (sometimes referred to as Carnivore Island or Carno Island or Hell Island) is a small island in the very north-east of The Island.

The Dead Island is an island chain on the far north of the map, and one of the most dangerous above-ground regions in the game. Carnivores spawn here in mass numbers. While the Tyrannosaurs may be easy enough to notice ahead of time and avoid, the endless scorpions and sabertooths may get the jump on an unwary explorer. The island is predominantly sandy beach, with a small elevated rock outcrop in the center. Two outlying islands border it to the northeast and southeast. As a general rule, the Southeast and Southern edges of The Dead Island chain tend to be safer than the north side and interior.

There are five beacon spawn locations on the island that are consistently blue-quality and above. The considerable distance between the island and the mainland means that accessing these treasures is best done by flying mount or raft.

When making a base here, think about water mainly. Making a base atop a rock can be the safest option, but it requires an immense irrigation system that setting up alone is quite a dangerous task. Having water tanks would probably be the best option but they can be unreliable and empty quickly when faced with hiding from Rexes or other predators. Another option would be to live on the island where no creatures spawn, but moving over the water can slow you down making you a primary target for a hungry raptor or a shallows-dwelling megalodon. When making a The Dead Island base, take all of these factors into mind.

The sea surrounding the island is filled with lots of Megalodons. This makes it dangerous to hunt Coelacanths, since those are common to find around the coast, but rather uncommon in the deeper sea.

The small island on the Northeast side of The Dead Island is overrun by Argentavis.

On the small island on the Southeast side of The Dead Island, creatures don't spawn.