Saddles allow you to ride various creatures in ARK: Survival Evolved. Riding a creature requires crafting the correct saddle and equipping it from the creature's inventory. some saddles have 'special abilities'.

Most Saddles made with Engrams have 25 Armor. Carbonemys, Trike, Pachyrhinosaurus, Diplodocus, Paracer, Paracer Platform and Bronto (not platform) have 20 Armor. The Titanosaur Platform Saddle has 1.0 Armor. All Tek Saddle made from Tekgrams have 45 Armor. Saddles made with Blueprints can have better stats. With the exception of the

, saddles don't lose durability, and it is not visible on tooltips.

Titan Platform Saddles are not included here as they are not crafted, but automatically equipped on tamed Titans.

By gathered in-game data, the following formulas were derived for calculating damage reduction to dinos from armor.

The general formulas are as follows:

The value of the Armor Coefficient varies based on the source of the damage and are shown in the following sections. 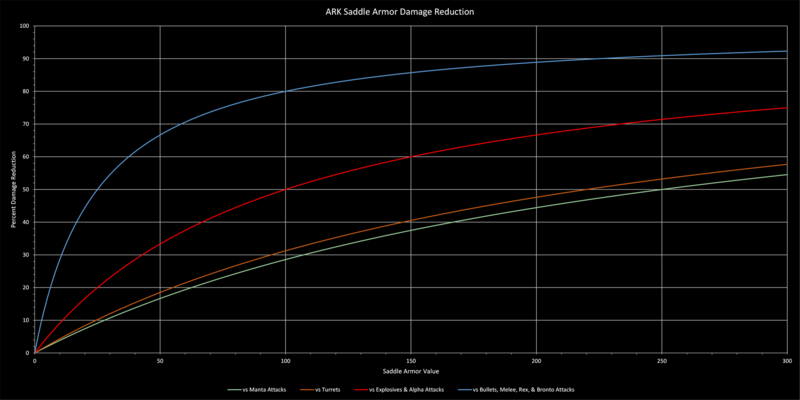 This graph demonstrates the diminishing returns of damage reduction from saddle armor. (request verification of vs Turret calculation)

For explosive damage against saddles, the Armor Coefficient has a value of 1.

Example using 750 explosive damage (Grenades and rockets from a primitive Rocket Launcher) against a creature:

For bullet damage and player melee weapon against saddles, the Armor Coefficient has a value of 4.

Example using 60 bullet damage (bullet from a Simple Pistol) against a creature:

For dino damage, the Armor Coefficient varies on the attacker. It can vary widely with some examples are shown below:

Tek Saddles have the ability to shoot bullets with Element when activated with Ctrl and pressed with right click. However, to utilize such ability, the saddle has to be learnt from beating

Bosses containing such tekgram. Riding on creatures with Tek Saddle does not require the Tekgram, however.

requires Tekgram to utilize its other turret seat, but not when riding in the rider seat.