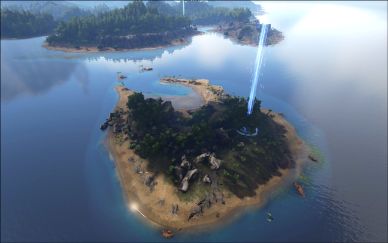 Paraceratherium: A levelled one, preferably with emergency medicine will be able to swim to the island with ease and take blows from any Megalodons or Mantas. Recommended to bring a water escort with you for protection.

Sarcosuchus/Beelzebufo: Both semi-aquatic mounts will bring you to the island safely, the former will have enough health to survive Manta swarms by getting by on land. Be cautious as aggravated herbivores can cause them harm.

Baryonyx: Baryonyxes bred and leveled for health, stamina, melee damage and speed can easily take on Manta swarms and even some Megalodons. On land they lose the area stun attack but are still very reliable. Since the water area around the island can be used for Raw Fish Meat and even Raw Prime Fish Meat gathering, it is very reccomended that you bring a bred Baryonyx "swarm", a.k.a. riding one and having multiple Baryonyxes set to follow and preferably set to passive until ordering to attack the prey. Very efficient since player can choose which one to mount when one goes out of stamina.